Wow.  I have thousands of stories from just 5 days.  Where to start… 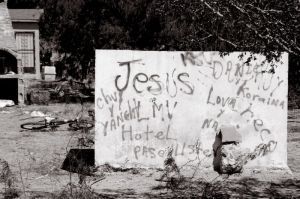 Not only did we spend a lot of time at Casa Hogar Elim, many of us wandered out into the surrounding areas.  We went into “las colonias”, the local neighborhoods surrounding CHE, the middle school, a few stores and into the city.  I noticed a lot of graffiti on walls, but was surprised about the theme of it.  At first I thought it might be a random thing, but as I continued to look around, I saw the name Jesus a lot.  Now my first thought is that some guy named Jesus (he-sus) has way too much spray paint and he gets around.  Also, my lack of Spanish means I’m probably posting photos with no telling what on them, however these people worship Jesus all the time and He is in the forefront of their lives.

And as Sloan said in an earlier post, they love to know our names.  Not only do they want to know our names, but they write them down, like in this photo.  “Jesus te ama” is Jesus loves you.  This is one of many pieces of paper like this.

This other photo is of a chalkboard in one of the classrooms.  The kids love chalk!  Shortly after we arrived, the concrete was covered with chalk art, much of which had crosses, hearts and Jesus.  I haven’t even gotten to those photos yet.  They are absolutely beautiful.

I’ve been back a few days now and it’s difficult not to think about the experience of this trip every single minute.  I went down there to serve them, but that worked the other way around.  I think it was Elizabeth who had a Facebook update of being forever changed.  I don’t see how anyone could go there and not be forever changed.
Jody Wissing

add to the chaos: